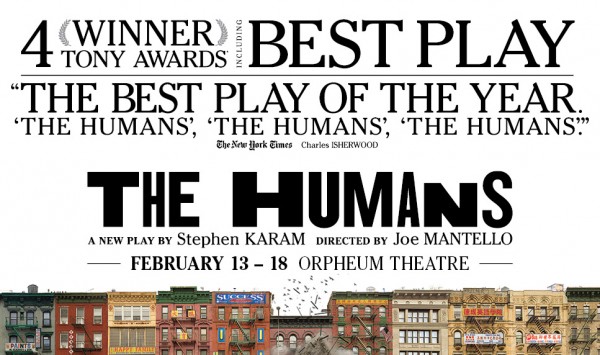 The Humans Orpheum Theatre Review – Dysfunctional families unite and go see this hilarious and astonishing Broadway play before it leaves town. The every day struggle is real for this working-class family that join together in a noisy Manhattan apartment in Chinatown for Thanksgiving.

With an incredible cast of only six, this Tony Award winning best play is sure to captivate just about any modern American family. The Blake family shines in this run-down two-level stage set that lets you see both floors at once, it’s quite brilliant.

If you have seen the original “IT” movie, then you may appreciate that Richard Thomas plays the roll as Erik Blake, or dad, whom to me, has a striking resemblance to Jeff Bridges, at least from where I was sitting. Also, another familiar face from a classic football film I’ve always enjoyed, “Best Of Times” is Pamela Reed, whose strength is pronounced as the character of Deirdre Blake, wife to Erik.

Add a grandmother (Fiona “Momo” Blake) who suffers from dementia, a recently dumped lesbian daughter (Aimee Blake) and a part-time working daughter (Brigid Blake) with her live-in-boyfriend buried in student loans, and you got a financially strained family getting together over a holiday meal, as we, the audience get to eavesdrop on them.  With stories shared from the past, followed by laughter and tears, it will all seem relatable. The strong performances of the cast deliver this with perfection. It really feels as though they are a family and these are real relationships.

There are a few elements about the supernatural and odd dreams that may leave you a bit confused by the end, and as to how it actually does end, but if you pay attention to the tropes and storylines, you will come to your own conclusion.

You have until February 18th to see The Humans at Orpheum Theatre, order your tickets here.