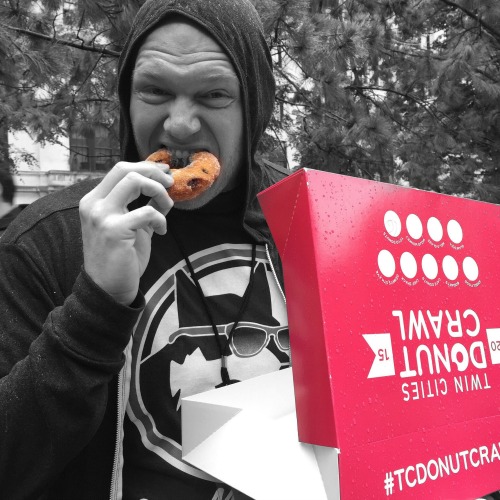 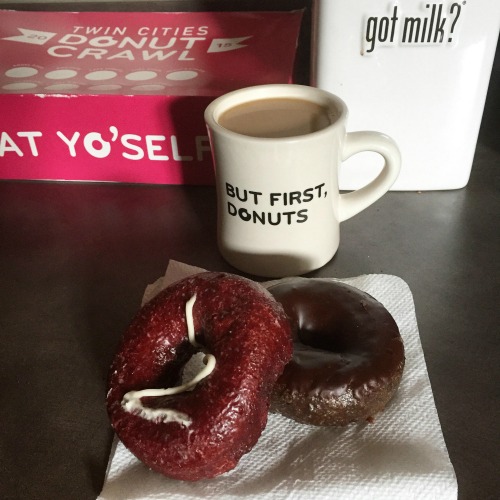 They were one of the eight participants for this years festivities held at a new location, Mears Park in St. Paul. The other seven local bakeries of pastry goodness were Glam Doll Donuts, Mojo Monkey Donuts, Bogarts Doughnuts, Yoyo Donuts, Angel Food, Denny’s 5th Ave and Mel-o-Glaze. Chef Shack was suppose to be a ninth addition, but rumor has it their truck broke down along the way. Biting into these sweet goodies as my thumb jabs away forming the next word on my iPhone keyboard, it’s hard to be mad at the events that took place yesterday.  When I woke up Saturday morning I had no clue it was going to rain, but grabbed the umbrella and headed to Mears Park for an 8:45am arrival time for this 9am to noon crawl.

Upon arrival, there wasn’t as much parking as stated due to a Farmers Market going on at the same time just blocks away. Although, I was lucky enough to score a meter a block away and it was free, again, due to the Farmers Market. There were check-in tents at all four corners of the park, so I walked up to the first one in sight and waited under five minutes to get my press pass (not sure what the benefits or significance of wearing this was), hoodie, shirt, coffee mug and donut box for the total VIP experience. I heard this check-in went poorly for some, like no shirts available in the size preregistered for, confusion on if you were in a VIP line or not, etc. seemed to go pretty smoothly for me, although I can see the issues. For instance, I switched up one of the shirt sizes I got, which they shouldn’t have allowed, and there was no communication between all check-ins as to whom has checked it off the handwritten list. 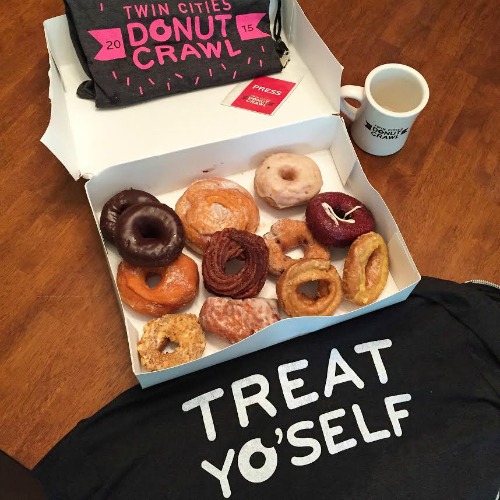 Staggered around the park were tents with each of the seven donut shops involved, a tent with a Dj centrally located and also a couple of small tents with gallons of hot coffee provided by Five Watt Coffee for free. Decided to head on over to the caffeine boost before the sugar rush. Now, I don’t know if it was because I got the very last pour out of the dispenser or not, but for me, this was the worst cup of coffee I’ve had. I can’t even describe the taste. Mehyuk! I did not have any more throughout the day to compare, but if I were to compare it to last years donut crawl and the same vendor, it was night and day.

As I waited for my “Get Donuts Crew” to arrive (seven of us total) I found it very challenging to hold a cup of hot coffee, a donut box and an umbrella. I blame Mother Nature for this struggle, along with not having a personal umbrella holder to follow me around during these tough times. Once my crew was fully assembled we decided to brave the intertwined and confused lines that were created by chance. Most likely no matter where you were standing in this park, you were in a line whether you wanted to be or not. You didn’t know which line you were in, where it started, where it ended, but hey…you were in a line to get a donut. Parents with strollers had the toughest time dealing with this situation as some of the lines lead through mud, rocks and even across man made creeks. 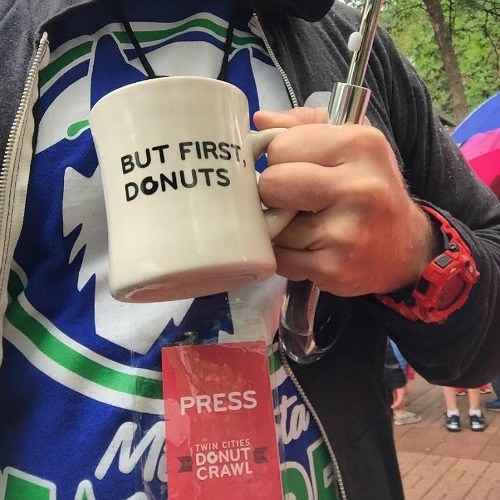 The lines had merging lanes just like our wonderful traffic system here in the metro, and bumping umbrellas created gaps to allow others to cut in. You could hear the complaints and confusion from all directions of the crowd, most were “I still have yet to get a donut!” Some did the best they could to cover their donut box, most with the shirt they got with their $35 entrance fee. If you weren’t quick to cover your box, which looking around appeared to be the case, you were dealing with a wet piece of paper to enclose your donuts, if you were lucky enough to get some. Notable mention, VIP was $75 a person, got you some TCDC gear (love the jersey style light weight hoodie) but didn’t get you much of anything as far as line perks. 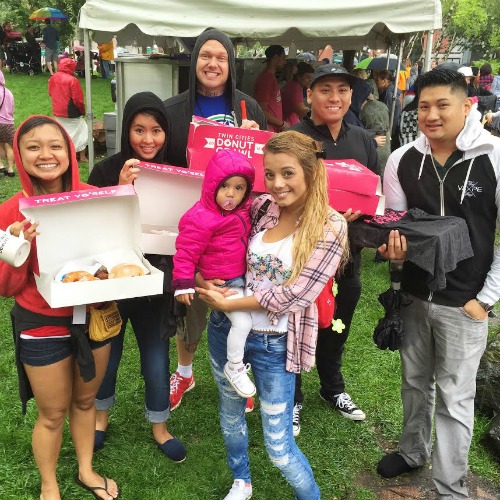 Once the chaos of 3800 attendees arrived, basically all at once (compared to 500 last year), the what was expected to be an organized donut crawl turned into exactly what it was, a wet mess. Announcements were made that each donut tent would open up the back sides to allow attendees to come from different directions and faster delivery as donuts were literally tossed into boxes. They also threw out the idea of stamping each box upon receiving a donut from each participant, mainly due to the rain, but also just to speed up the process. Once these two things happened, my crew agreed that lines were no longer valid. Just walk up to each tent and get your donut in a free-for-all frenzy, or as my crew member David decided was the “boop-boop” method. With that approach, we all got donuts from each location (more than one donut at some) in less than an hour. 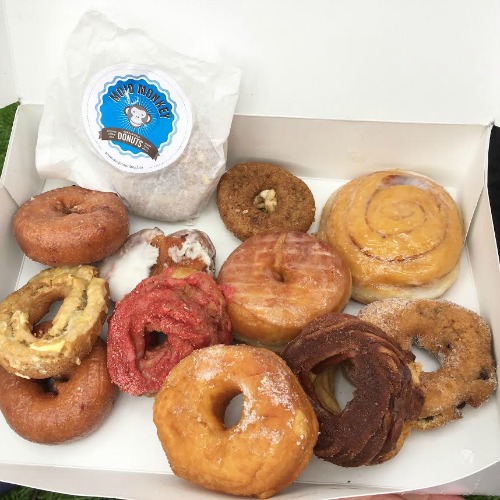 Despite the crappy weather, location and few flaws, Twin Cities Donut Crawl was still a success with raising “over 30,000 meals for Second Harvest Heartland” and everyone learns from their mistakes. You could complain all day long or do what we did and just deal with it and laugh at the situation. We were still all smiles as shown in the picture, and that credit goes to the fabulous participants that baked up all of the deliciousness and dealt with the situation like the pros that they are. Not a bad donut in the bunch and still enjoying mine! See you next year!