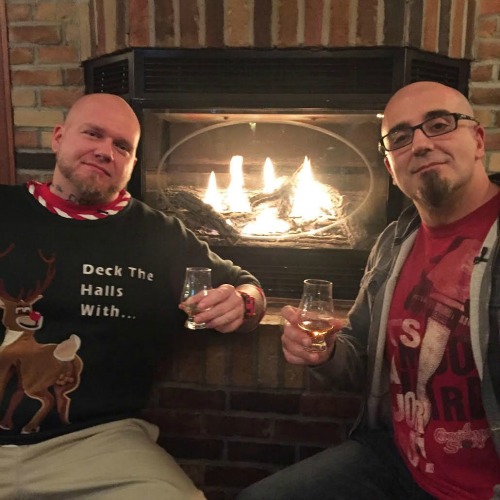 Phatphood Eating Twin Cities: Tamarack Tap Room – We decided to do a special Christmas segment of #FOODPORN since we will be taking vacation next week. Don’t you worry; I’ll still be eating that good good, just not for TV. We are dressed for the occasion and keeping the theme going by coming here to Tamarack Tap Room. Tamarack as you may know is an American Larch, which is a tree in the pine family, hence a Christmas tree, er…well, close enough right? Snuggled in the 10-year-old Tamarack Village here in Woodbury and what use to be a Champps Americana for 20 years is now home of the finest craft beers, eats, and libations. I’m ready for some strong whiskeys and scrumptious dishes for my holly jolly belly. This will be airing TONIGHT at 11PM on ‘On The Fly’ only on MY29. 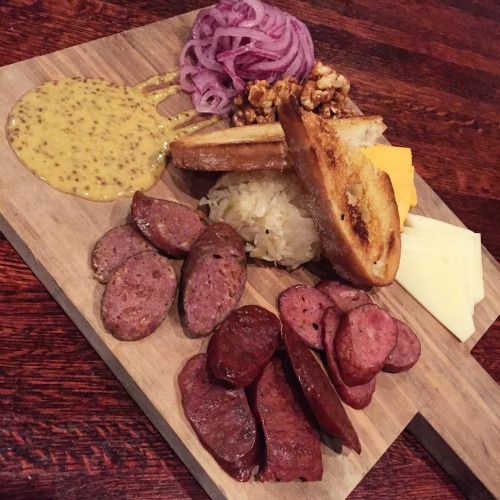 Starting off with some small plates, and what I have presented in front of me is a Sausage Board – Jalapeno elk, Spanish chorizo, Andouille, local cheese, nuts, pickled red onion, beer mustard, sauerkraut and ciabatta. I’m diggin’ every single element on this board. The beer mustard is wonderful and pairs with everything shown and each sausage has its own unique taste that I enjoyed. 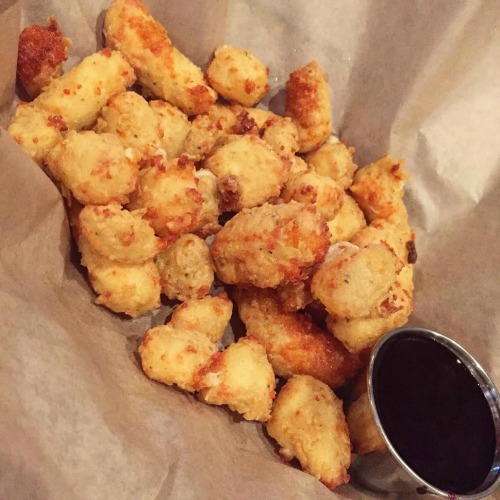 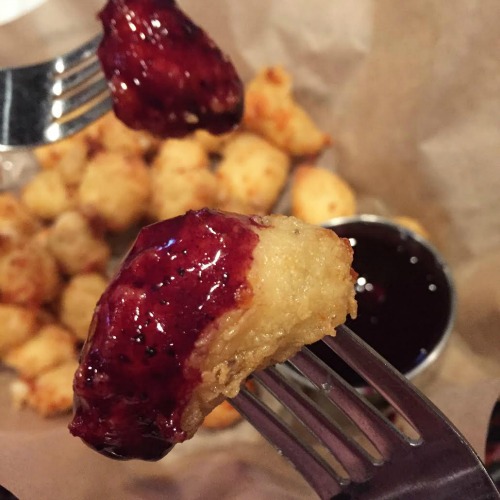 Now if there are cheese curds on the menu, you best try them. These just happen to be Beer Battered Cheese Curds – with Wisconsin white cheddar and served with smoked blueberry ketchup. This dipping sauce is downright awesome! Not to put down the cheese curds at all, but this was truly the star of this dish. I want it on my pancakes. 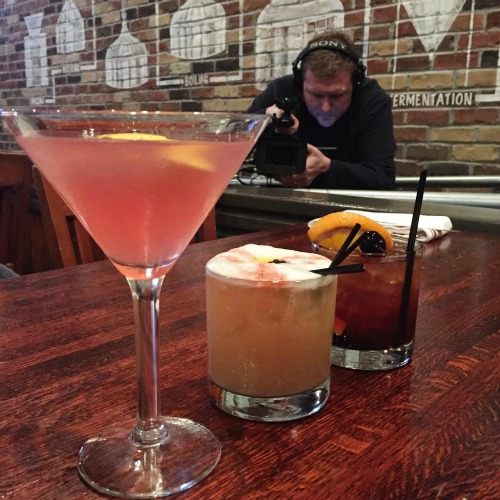 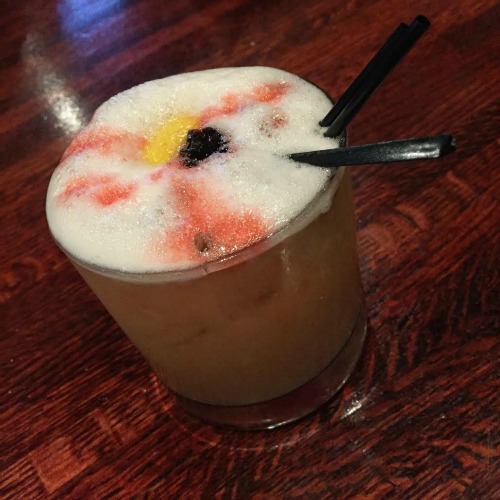 Raspberry Lemondrop – A twist on a classic made with Prairie organic vodka, French Chambord, an all-natural black raspberry liqueur, Cointreau, lemon juice and simple syrup served in a martini glass with a lemon peel.  It’s a great tasting drink, but it’s also a foo-foo drink, so that’s going to Producer Doug back there.   Bourbon Amaretto Sour – 100% real almond Gozio amaretto, buffalo trace bourbon (a relatively dry, nutty bourbon), house sour mix, fresh egg white (for foam and texture) and Peychaud’s (creole) bitters. I was a bit skeptical of the raw egg whites, but I’ll try anything. This was good and much stronger than I had anticipated. Egg white is the new froth; take that Starbucks. Maple Bacon Glaze – bourbon soaked bacon boiled down with pure maple syrup. Buffalo trace bourbon and Aperol, a bitter orange liqueur for balance. Mr. @tonyflizzle hogged the bacon outta this one, but he did let me get a small sip, and I want another one. Bold flavors here. We’re drankinnn!! 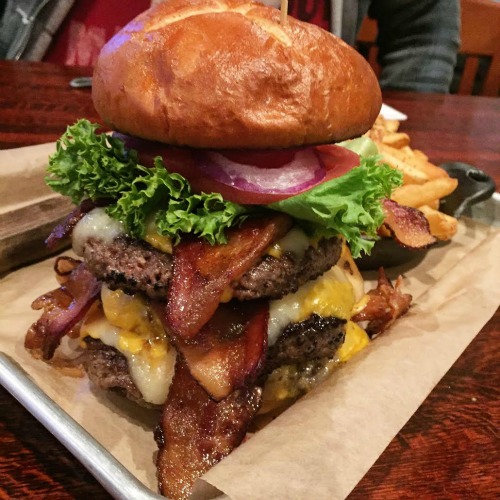 The Big 24 – 24oz triple decker, 6-slices of applewood smoked bacon, 3-slices of American, 3-slices of Swiss, lettuce, tomato, red onion, house pickles and house sauce, all stacked in between a brioche bun. Each patty is a half-pound special blend of hand ground Midwest beef from Minneapolis butcher W.W. Johnson. This burger is offered as a challenge with having to consume the entire meal (fries included) within 8 minutes. @TonyFlizzle and I were wondering if we cut it in half that maybe we could just do it in 4 minutes. I don’t think they were having it. These seasoned meat patties were superb in flavor alone. Damn big, and very good tasting burger here. Quite impressive, but what’s next? 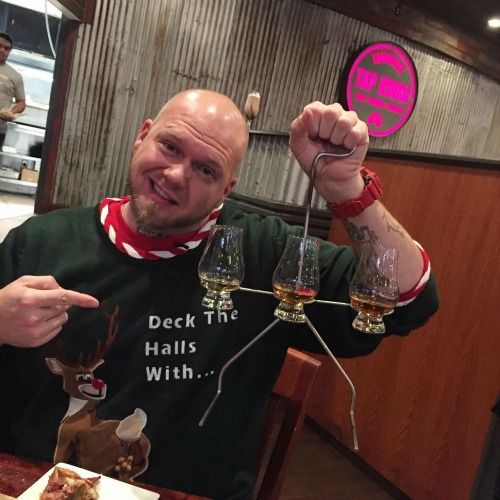 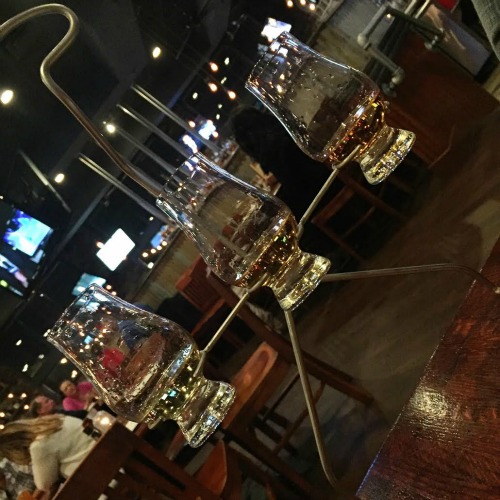 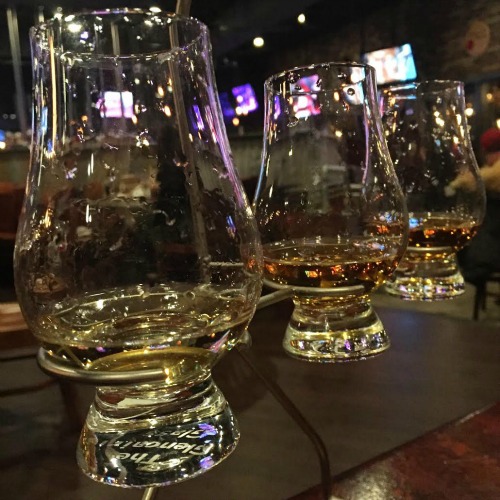 Time for another round, on me…for me!  Whiskey Flight: Knappogue 12 – Irish, pot-distilled whiskey made with barley. Light, grassy, earthy. Yamazaki 12 – Japanese whiskey that is both pot and column distilled and then blended together, aged in Japanese oak barrels that gives the whiskey a unique cherry flavor. Very complex, this whiskey hits a lot of notes. Elmer T. Lee Single Barrel – From Buffalo Trace Distillery, a single barrel, hand-picked by the master distiller. Very aromatic, rich and full of vanilla, caramel, and lactone notes from the wood aging.  I’m pretty sure I can blow fire out of my mouth at this point. 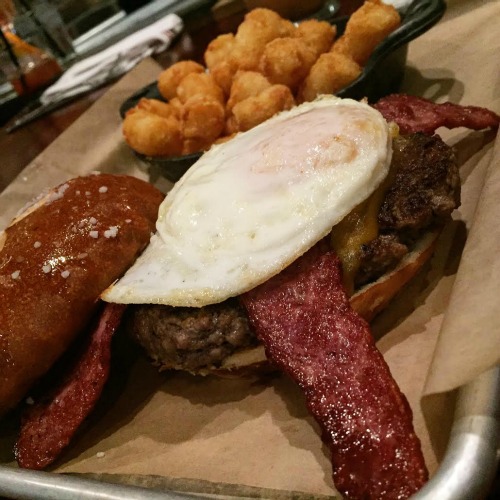 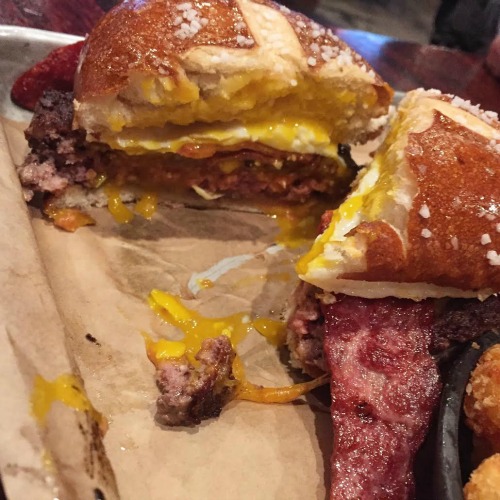 Locavore – Local Strauss free range grass fed beef, duck bacon, Wisconsin-aged cheddar, fried egg and pretzel bun. As if one 24oz burger wasn’t enough, we absolutely had to try this just because of the magic words; duck bacon. Just as I expected, the bacon did justice. These aren’t your skimpy slices of bacon here either, and who doesn’t like an over easy egg with #yolkporn on their burger? Pretzel bun again, this one actually has the salt on top unlike others we have devoured in this segment. Always get a side of tots. 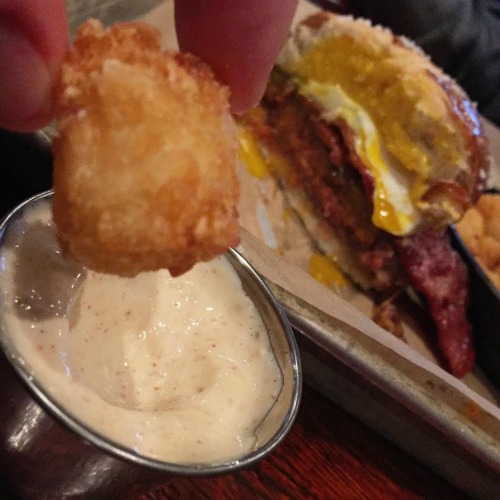 The chef came by and asked if we wanted any dipping sauce for the tots. He mentions Ghost Aioli and it was music to my ears with a slight burn to my esophagus. This sauce needs to be jarred up and taken everywhere. Oh My WOW! 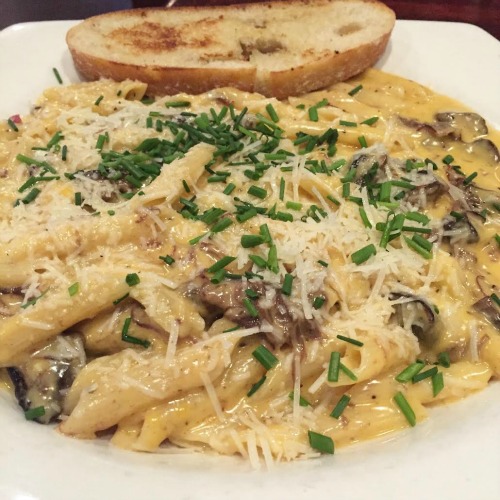 Short Rib Mac N Cheese – Four-cheeses, wild mushrooms, penne and ciabatta. I almost didn’t get to try this dish, but sure in the hell glad I did. Aside from burning my tongue because I couldn’t wait to dive in, with my remaining taste buds, this was spectacular. This dish had an ample amount of tender shredded short rib in a perfect mixture of cheese. Give me a glass of red with this dish and I’m good. 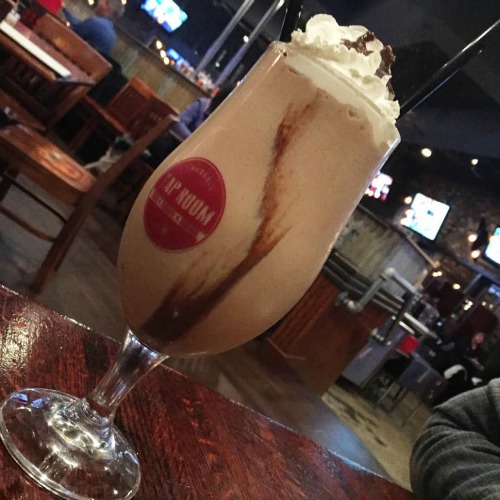 Not that dessert isn’t (double negative) my favorite part of dinner…okay, maybe it is. Anyway, it’s about damn time I get some Peanut Butter and Chocolate served up as a shake. The peanut butter was dominant here, and I loved it. I’m kind of full, but I really don’t want to stop. @tonyflizzle and I shared this Lady and the Tramp style. Check out that kinky mess when this segment of #foodporn airs tonight at 11pm on ‘On The Fly’ 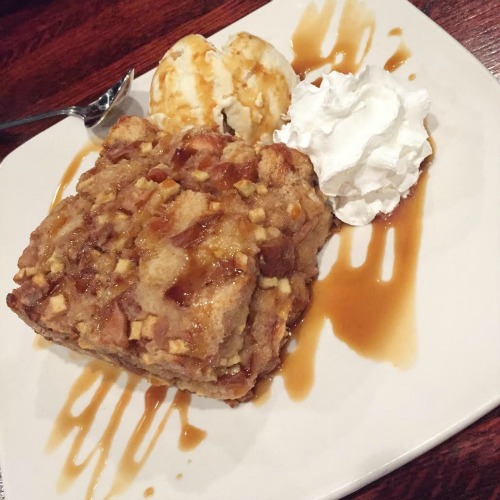 The staff said; “you guys cannot leave without trying our in-house bakery chefs Bread Pudding.” Fine, you don’t have to threaten me with stretch marks. It is incredible and it’s served warm even, yum. I think we officially did some damage here. I feel warm and fuzzy. What a great place to come anytime of the day. An awesome staff with a sexy lumberjack like vibe going. I can certainly dig that. I still want to try their bologna sandwich and their chicken and waffles. Next visit. Benjamin is the crafty alcohol wizard here. He can whip ya up something fancy or break down every element in a whiskey so come check this place out. The word is already getting out; it gets pretty packed. 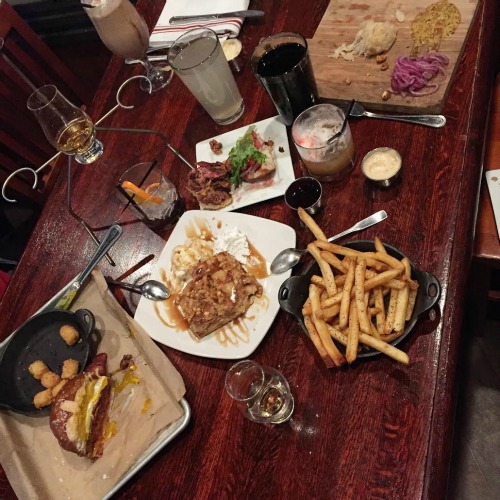