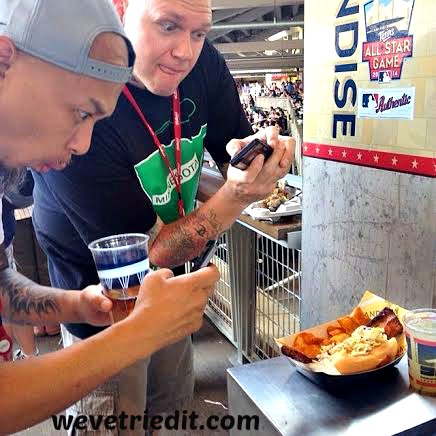 DJ Phat All-Star Game Menu Review: If you pay attention at all to Minnesota sports then you have heard about the four new meaty food items that are being added specially just for the All-Star Game menu.

Our food expert DJ Phat tried out each of these new menu items last night. If you are on Instagram be sure to follow DJ Phat @phatphood – you won’t believe what this guys eats! 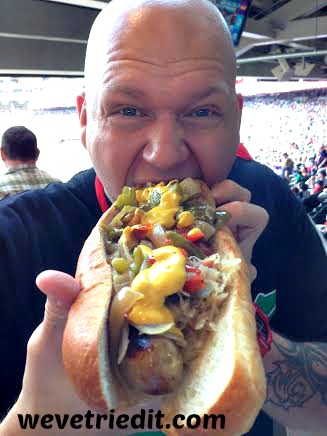 • The Double Header: A brat and a Polish sausage with all the fixings, served on a foot-long bun and branded with the All-Star Game logo. (At all Kramarczuk locations) 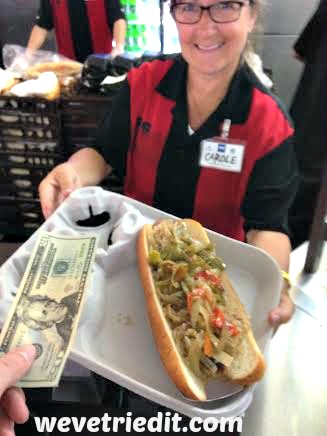 Phatphood: When asked if I wanted all the fixings on my double dog by Carole at the Kramarczuk’s kiosk I immediately answered with a question of my own, “what are my options?” By looking at my picture you are probably thinking to yourself “where’s the beef?” A perfectly seasoned pork polish sausage cased with tradition, accompanied by a good ol’ bratwurst buried under layers of onions, peppers and sauerkraut. Add some mustard to this bad boy and you have yourself a ballpark slugger. It was what it was, two links in a bun. A branded All-Star bun to be exact. It was good, difficult and messy to eat at a ball park, but hey…it’s a big ass double dog! 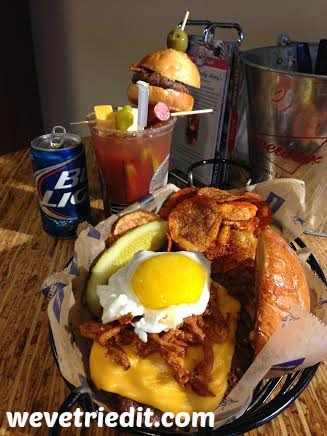 • Bigger, Better, Burger, Brat or Bacon Bloody Mary: A loaded Bloody Mary served with a choice of burger, brat or bacon on a stick. It also comes with an eight-ounce Bud Light “snit.” (In section 114)

Phatphood: Yup, $15.89 for a most likely one shot pour beverage with a slider on top, or as Anna at Town Ball Tavern put it “18 dollars even with tax.” Not worth it. The slider, being the monumental star of the drink was dry and lacking flavor. The Bloody Mary was mediocre at best, and the meat stick…meh.

• Brat Dog: A brat stuffed with a hot dog and served on a foot-long pretzel bun. (At Hrbek’s in Section 114) 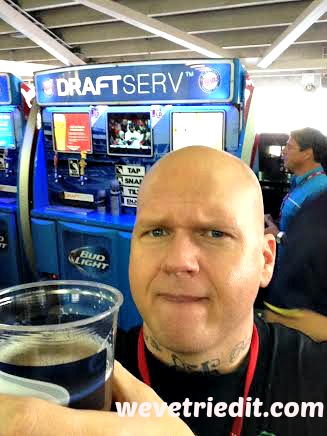 Phatphood: I regret to inform you and my omni directional belly that I wasn’t able to get this item. Hrbek’s stopped serving food at 8pm and I didn’t make it until nine minutes after. Bummer, I know. I was held up at the all new DraftServ self serve beer station. I don’t know if I am just a fast learner or if everyone else is just slow, but holding a preloaded card up to a censored square that reads “Tap here” deemed to be challenging to some. You only have nineteen seconds each time you use your card to pour as much beer as you want…or can. That seemed to be difficult for most, anxiety is one hell of disorder. Moving on. 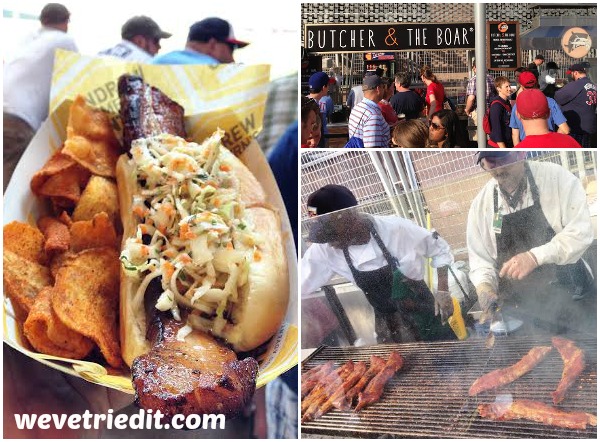 Since I was unable to try this hot dog stuffed brat no longer being served, the party moved to the sundeck where Butcher and the Boar took stage creating smoke signals of love. Hunks of that other white meat, aka pork was being tossed back and fourth in the heat by a mad scientist. Smoke & Fire Rib Tip Basket caught my eye and the order was placed. This basket filled with spicy and smoky sauced rib tips with a side of house-made spicy pickles was a finger licking perfect easy share meal at any ballpark. The favorable amount of BBQ sauce these tips were covered with was an excellent combination of spicy flavors. Pair it with a beer, as you should. 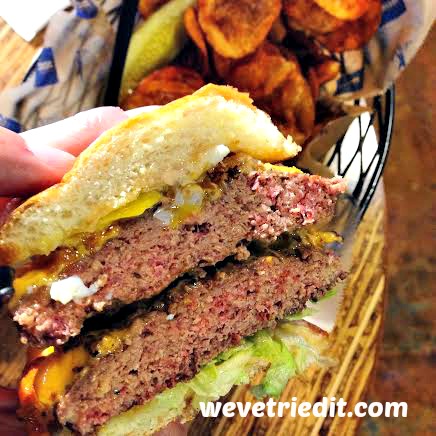 • The Hangover Burger: A fresh-grilled burger topped with a fried egg and served on a roll branded with the All-Star Game logo. (At the Town Ball Tavern)

Phatphood: Spendy? Yea. But it is at a ballpark and it really is a big ass burger! I had no clue prior to purchase that it has not only one, but two ½ pound Angus beef and ground bacon patties. Also topped with American cheese, shredded lettuce, fried onions, special sauce and a fried egg. I double palmed this beast and barely fit this massive gnarly burger into my jaws. When I did, my hands were soaked in a river of yolk. Had to cut it and half to see the beef and bacon mix as well as to savor it with less mess. 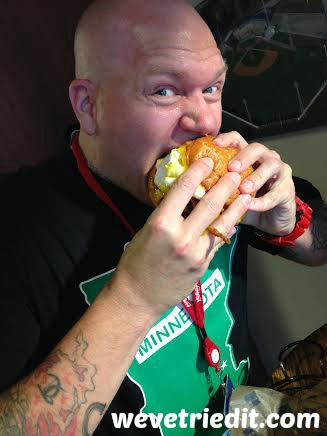 That didn’t help, the yoke have made my hands into glue and the top bun slid around making it hard to handle. Worth it? Yea. You will get full if you pair this with a beer, or in my case, a Bloody Mary topped with a slider and a mini beer chaser. The Cajun potato chips were good, but way over seasoned. There were chips that easily had a half teaspoon of seasoning on them.

DJ Phat’s overall experience: I had fun and left extremely full. Had to use the T-mobile charging station and a friend’s mobile phone charger to stay in full swing (that’s ballpark humor). Everything was as good as expected, a little too much bun for me throughout the day though. More beer, less bun. I was however pretty disappointed that I was unable to try the lobster corn dogs. It was another new food item for the All-Star games but was only available to the Legends Club level. None of the guest service members new exactly where to get it and only 2 out of the dozen that I asked had a list of where and what the new food items were, yet I was told that I could ask any one in the blue guest service shirts and they will have a list of the items and the locations of them. Nope. So without being able to get the lobster on-a-stick thingy, I decided to visit Minnesota’s very own Andrew Zimmern’s Canteen once again. 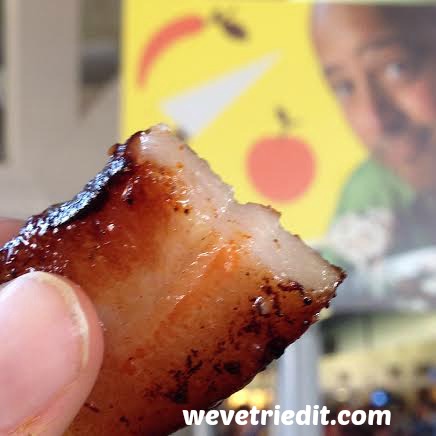 I previously had a few items from his food truck two summers ago when it debut downtown Minneapolis and was amazed at first bite. We meet again and this time I was eager to try his Minnesota Crispy Belly Bacon with vinegar slaw and jalapeno jelly at an easy to spend $10. No bun was harmed in the devouring of this succulent slab of pig belly. It was perfect and the slaw paired perfectly. Then those damn Cajun chips again!! Pass. Speed round…The Panic At The Disco surprise concert between the Future’s Game and the Celebrity Softball game was cool. Self-serve beer is cool once the hype is over and people get smart. Think of the first time you watched everyone of all ages use the Coke Freestyle machine, yea. 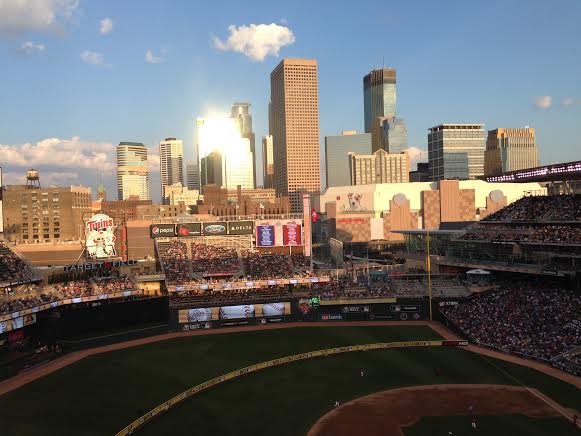 All-in-all, it was a fun-fulfilling day with food, beverages, entertainment and good company. Bravo Target Field and the hype of the All-Star Games for the new food on the block. Please stay why don’t ya? Burp. 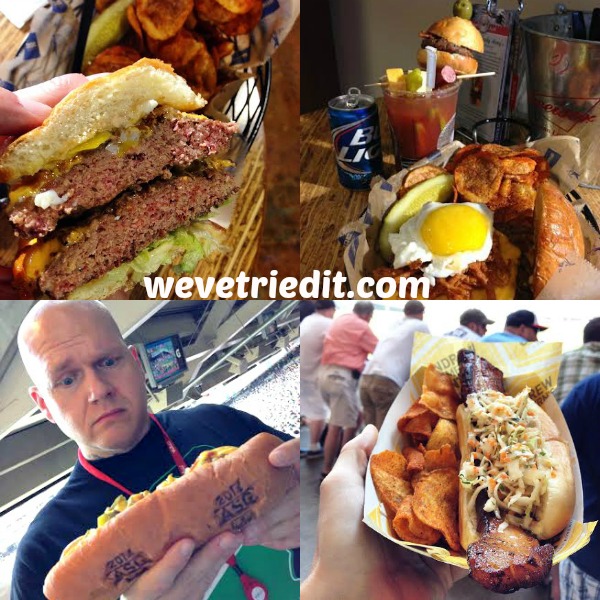