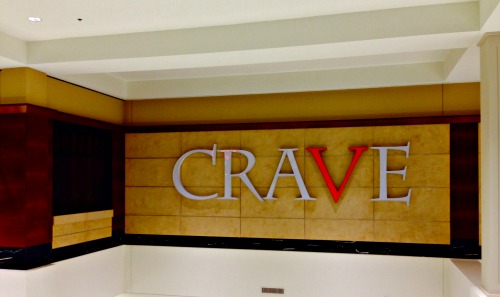 Crave Mall of America Review Part Two: After a horrible experience at Crave Mall of America we posted a less than favorable review. Shortly after posting we received a tweet from corporate and then a call from the GM at the MOA location. After a great conversation with Jude, we decided to send in one of our food and product reviewers (@phatphood via instagram) to see if he would have the same experience at this establishment.

Please note that the management and staff were aware of the date this was to occur and that it was a gentleman with two kids to come in to review their service to see if it improves. So, naturally we went during lunch time and added another person to mix it up a bit.

PhatPhood: We arrived at Crave on Saturday afternoon. I had with me my mother and my two sons. We were all greeted from a female at the hostess stand and were seated in a booth very close to the main entrance within seconds. It was loud where we were sitting with the openness of the mall so near to us so we had to talk loudly to each other. It was also very busy for this time of the day, nearly all tables were full in the section we were seated in.

Our server came over to us promptly after being seated and introduced himself to us as Jeremy. He then asked if we wanted to started off with any alcoholic beverages. We declined and I said that “the three of us will have good ol’ tap water.” My mother ordered an ice tea and he ran off to get the drinks.

We studied the menu for a bit and my mother asked if I thought they had anything low sodium for her to eat. I said I’m sure they’ll have something being that my mother had just received doctors orders to watch her sodium intake because of her blood pressure. When Jeremy came back with our drinks “here is some of Bloomington’s finest” he joked and then he asked if we would like to order appetizers and I told him no and that we were skipping apps and going to order our meals instead.

My youngest son ordered first, he then politely moved onto my mother “and for the lady?” She then asked if there were any low sodium choices on the menu after seeing at the bottom it stated to ask your server if you have any dietary needs. His reply was “Noooo not really.” Keep in mind, he had no clue as to what my mother was intending to order. My mother just came back with an “oh, okay…I guess I’ll have the turkey club sandwich with fries” and Jeremy moved on to me and my eldest. My boys and I all ordered sushi and I also ordered their Beef Kogi tacos since I heard great reviews about them.

Jeremy came back with steamed towels, chopsticks and soy sauce for the sushi eaters. He ripped open the prepackaged chopsticks for each of the three of us as we removed the chopsticks and he held on to the paper which I thought was a clever way on not having to come back to clear the table of paper debris. He then poured each of us soy sauce and let us be. 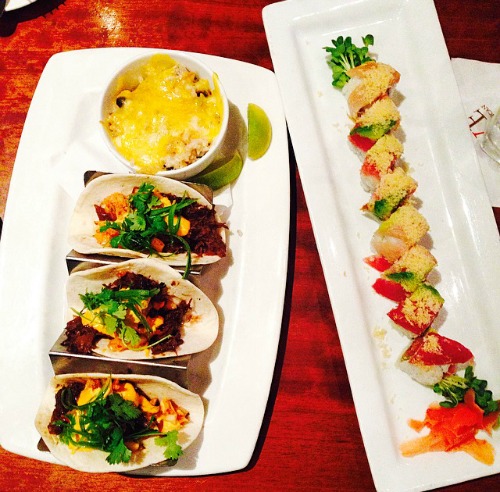 Our food arrived much faster than I had even expected. Two female servers were walking my way from the kitchen window with plates of food and I was actually amazed on how fast it was as they set down the dishes and new who they went to. I snapped photos of all of the dishes as I always do before anyone could touch them. My family loves to be put on pause while I do this. We then enjoyed our meals and conversation.  She said her turkey sandwich was very good, the turkey was very moist and delicious. Which is impressive with how picky she is, even prior to her recent visit to the hospital. She really could not eat the fries as she said they were heavily salted. 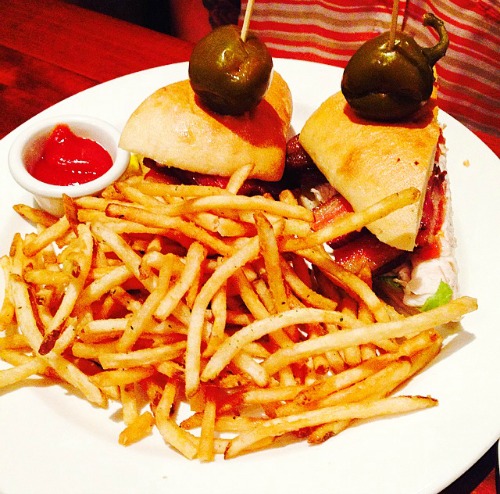 Both of my boys devoured their sushi and even some of mine. Hey, they are growing boys! My sushi roll, crunchy spicy tuna roll really wasn’t that good. In my opinion it lacked flavor and was quite boring. The tacos? Amazing. Would definitely order them again. Great flavors, tons of meat, very full and the kimchee was a great touch. That was the good. 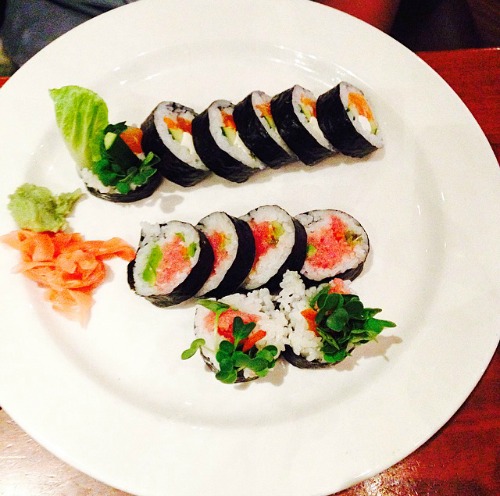 The bad? We were never asked for refills or given them without asking. My mother had a quarter of a glass left when our bill came after we turned down dessert. I was in complete shock that they did not offer any type of low sodium alternatives. He did not even offer low sodium soy sauce. Is this not a standard in most sushi restaurants these days? He could have easily suggested that he could ask the cook to not salt the fries as well, but maybe I’m asking for too much as a concerned son.

After the bill came I did ask to speak to the general manager that was working, as instructed by my WeveTriedIt team. He came to the table and I introduced myself and told him which company I was representing and he said, “we were expecting you but thought it would be during dinner.” It was clear the staff was warned and on radar for my arrival.

I asked the general manager the same question my mother asked the server and how he would respond to someone that needed a lower sodium meal. His response was basically “our servers are not trained to alter the menu items but could certainly ask the cooks if it were requested.” He then asked my mother if she made a specific request which she did not. We get it. Overall, it was a good experience with them having a heads-up. I would not mind going back yet another time when it is not quite expected.