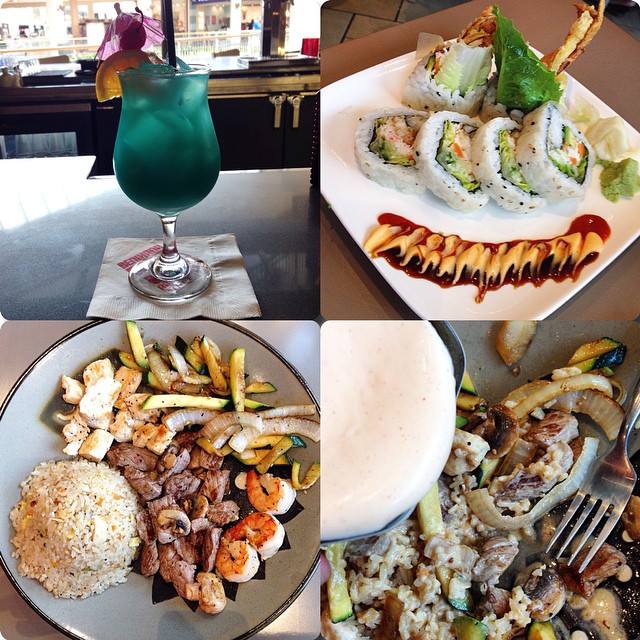 Arrived at 5:30, was greeted and asked how many in my party. Was given a buzzer and was told it would be a couple of minutes. Cool, it’s empty but ok. The couple next to me was told they could go to the bar if they want and have drinks or apps, I wasn’t given that option. Sat at bar and ordered drinks, that same couple that was at hostess stand (much older) sat next to me and was told the two bartenders names, I wasn’t offered that information. Buzzer went off, hostess came and said that was an accident. Buzzer went off again 5 minutes later, oh, they’re ready now.

Go to hostess stand, they are trying to seat me with a few other people for a hibachi table. Nope, I didn’t ask for that (keep in mind there are many, many tables open to sit at), so I now had to ask myself. Was seated out on the mall patio, was not given an option or asked if it was alright.

Ling took my order, brought out soup and salad. She realized I didn’t have utensils so she grabbed a fork quick and did a stretch hand off to me as she was talking to the other table about their horrible experience, I’m sure. Didn’t finish the salad. I left the fork she long armed me earlier in the bowl. When she came to clear the soup and salad she asked if I want to keep my fork. Now I’m at a buffet instead of a restaurant, great.

Received my Rocky’s Choice, minus any of the sauces that I actually asked for extra of, neat. After she was reminded she brought out the sauce, apologized and said “I bring you two” as in to make up for none? Now many of us Benihana veterans can agree that we pour our shrimp sauce delicately over everything on the plate with a majority of it smothering the fried rice. Well I went to do that, and at this specific location it was the same consistency as turning over a DQ Blizzard and watching with amazement that it doesn’t fall out. So I used my handy dandy buffet fork and scooped out the shrimp sauce and added it to my fake hibachi meal. Now, if my meal was even slightly warm prior to adding my shrimp blizzard, this very chilled substance quickly put an ending to that. Might as well just call it leftovers.

Moving on…I was so lucky that I didn’t pay for this meal since I had a born day coupon, also to add to my excitement I was offered ice cream “for your birthday” yea, because we all know you get ice cream with all teppanyaki meals. Oh, was there ice crystals in that chocolate ice cream?? Nope, just freezer burn.

Good luck Mall of America Benihana’s…way to scare the tourists away from the restaurants and into the food court. Sushi was cool so 1/5