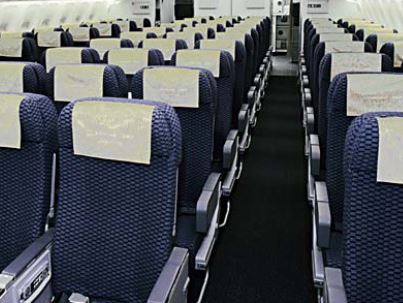 I can’t remember the last time I traveled and didn’t hear: This flight has been overbooked, we are looking for 10 people blah, blah, blah.

According to Delta.com the reason behind overbooked flights is that every major airline accepts more reservations for flights than it has seats available. This practice is known as overbooking. Flights are overbooked because a certain percentage of passengers are expected to be “no-shows.” This means they change their travel plans but do not cancel their reservations.

If airlines only booked reservations according to the number of seats on a plane, then flights would leave with empty seats and people who would have wanted those seats would be left having to find other options. To avoid this situation, the airline industry monitors no-show trends and books reservations to meet the expected passenger load. But even with the best forecasting techniques, sometimes more customers show up than were expected. The result is an oversold flight.

If you don’t want to be involuntarily bumped here are a few good tips on your best chance of securing your seat:

Get an advance seat assignment: Even if the airline only has a middle seat left to confirm, be sure you take it. Passengers with seat assignments are typically only bumped if they arrive late and their seat assignment is released.

Get to the airport early: Some airlines reserve a portion of their seat assignment inventory for airport check-in. Also, make sure your name is placed on the “standby” seat assignment list. While your ticket may say “confirmed”, if you do not have a seat assignment, you will be treated by the airline as a “standby” customer. Seats that are held by no-show passengers or passengers that upgrade at check-in to first class are usually distributed to standby passengers in check-in order.

The DOT regulates compensation for involuntary bumping. You have rights when you are being involuntarily bumped:

The airline should arrange substitute transportation that is scheduled to get you to your final destination (including later connections) within one hour of your original scheduled arrival time, there is no compensation.

If the substitute transportation is scheduled to get you to your destination more than two hours later (four hours internationally), or if the airline does not make any substitute travel arrangements for you, the compensation doubles (400% of your one-way fare, $1300 maximum).

If your ticket does not show a fare (for example, a frequent-flyer award ticket or a ticket issued by a consolidator), your denied boarding compensation is based on the lowest cash, check or credit card payment charged for a ticket in the same class of service (e.g., coach, first class) on that flight.

Voluntary bumping occurs when a passenger with a confirmed seat assignment agrees to give up his seat for negotiated compensation. This compensation is not regulated by the U.S. Department of Transportation (DOT): The airlines give employees guidelines for bargaining with passengers, and they may select those volunteers willing to sell back their reservations for the lowest price.

Know what questions to ask before you volunteer to give up your seat:

This year I have several trips planned and I am going to voluntarily give up my seat and I will let you know how it works out.

Leave us a comment below and tell us about your flight bumping experiences and suggestions.

Our information comes from Delta, smartertravel.com and travelsense.org.